My Grandfather, Athletes, and Me 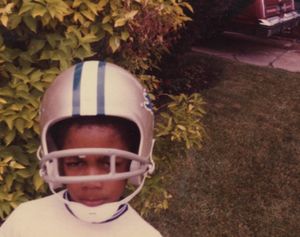 To say I wasn’t quite that athletic as a kid is like saying an elephant isn’t quite that big.  I wasn’t fast, didn’t have the best coordination, bad hands, and a little on the clumsy side.  But hey; I had a lot of heart! Lol  My grandfather knew this which is why my participation in sports was viewed as a recreational outlet at best.
Fast forward 20 years and now I’m an AAU dad whose 15 year-old and 11 year-old sons have more athletic ability than I could have ever dreamed of.  I talk to the dads of the top-tier athletes a well as the dads of the end-of-the-bench kids.  Many of the conversations are the same.  I hear about hired personal trainers, hired strength & condition coaches, private agility & speed training, and a never ending array of skills camps, leagues, and videos. I always walk away from the conversations thinking the same thing- “Damn, I’m happy my grandfather never invested this kind of money and time in my athletic aspirations!”
I’m sure if I would have shown any natural skill at any sport my grandfather would have tried to push it along. But I didn’t; so the emphasis was school.  But what if my grandfather wasn’t like that?  What if he was one of those dads determined to make their awkward sons into a college bound athletes?  What if he spent the thousands of dollars saved for me to go to college on football personal trainers?  What if my hours spent with math tutors were traded for speed and agility classes?  What if he was more “coach” than “dad?”
Nothing he could have done would have changed the outcome of my life (which I’m happy with).  But it could have strained our relationship or limited our financial flexibility. I’m not saying that any of those are dads are wrong; I’m saying there’s a lot to take into consideration because “heart” & “will” can only get you so far.