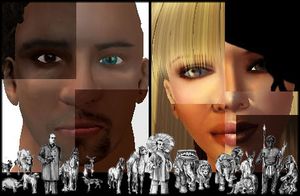 To say I grew up “sheltered” would be like saying an elephant is just a “little’ heavy.  My first 17 years on earth featured 10 grades of Catholic School, no riding my bike past the corner, streetlight curfews, more home cooked meals than B. King crowns, and a community of neighbors and friends to make sure I stayed in my lane.  It was understandable; my parents had died and my safety and future was taken very seriously.
I was also sheltered as it related to my interactions with non-blacks.  From kindergarten through high school the only white people I knew were teachers and the only other nationality I saw on a regular basis were the Middle Eastern decent men that owned liquor stores, gas stations and coney islands in Detroit.  I’m not saying this as if it were good or bad – just the reality of my up-bringing.
Enter 1995; I was 19 and began working in Dearborn, Michigan. The majority of my managers were white but most of my coworkers were black, Middle Eastern and Hispanic.  This was the first time I was actually able to engage in daily communication with other minorities.
The first thing that shocked me was how many shared interests I had the Middle Eastern cats my age.  We all liked hip-hop music, fast cars, and girls with big asses.  We smoked Black & Milds, talked sports, money, and car audio.  These men were not the same as their grandfathers that followed me around the gas station in search for a peach Faygo.  They weren’t the same as their uncles that told me, “No reading the magazines in the store!” as I browsed the pages of a Word Up magazine.  No; these cats were way different.  I was introduced to humus, shawarmas, and falafels.  I learned that not all Middle Eastern people were Muslims and every Middle Eastern person is not from Iraq.  Within a short period of time most of the stereotypes I learned were corrected and my understanding of Middle Eastern folks and human beings in general had been enhanced.
This was also the same time period when I made my only attempt to court a girl outside of my race.  She was Mexican and again; she showed me Hispanic culture was deeper than Taco Bell, Colors, and Cinco De Mayo.  Our dates were typical; movies, parks, and burgers.  In many ways we were just 2 young people experimenting but there were issues.  First she made it very clear that it would not be a good idea for me to be seen picking her up or taking her home.  She told me her parents believed every negative stereotype about black dudes and it would take her a while to smooth this over with them.  So I usually picked her up from a friend’s house and dropped her off a few houses away from her house.  The next awkward situation came when we decided to go to the mall together.  She was babysitting her 8 month old niece and she went with us as well.  This proved to be a very uncomfortable experience for both of us. As we walked through the mall, people blatantly stared at us.  They obviously thought her niece was our baby and we were a family.  I’ve never gotten that many mean looks from black women before in my life.  I felt like I was walking though the mall holding hands with Paula Dean! A few weeks later we had a heart to heart talk and her exact words were; “What’s the point?  This will never be more than what it is so before we get all caught up; let’s just go our separate ways.”  I agreed (though I was a bit more optimistic than she was).  A few weeks later my grandfather had inquired about her.  I told him we weren’t seeing each other anymore and let out an exhale of relief and said, “I’m glad you’re not seeing her anymore because the ese’s were going to kill you!”