A Glimpse at My Grandparents Marriage 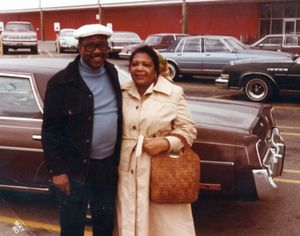 I remember vividly my pop’s words to a friend who tried to console him at my grandmother’s funeral, “It hurt bad having to burry my daughter but losing my wife is different.  I’ve never went through anything like this.”
Growing up I had the pleasure to see the mechanics of their marriage but I greatly underappreciated how special it was.  It was a mixed bag of traditional roles and things that worked uniquely for them.
*Pop paid all the bills except for grand ma’s credit cards and the telephone bill.
*Grand ma did most of the cleaning except for vacuuming, cleaning the carpet, and hardcore outdoor work.
*Grand ma didn’t drive, pop didn’t have to cook, they woke up together, drank coffee together in the a.m. but watched TV separately in the p.m.
*There were separate bank accounts, joint bank accounts, and money hidden around the house that they didn’t even tell each other about.
* Grand ma made all the decisions when it came to me – and that’s just how it was –lol.

I have enough photos to know that the early years of their marriage (40s and 50s) were full of nights spent at jazz clubs, dinner parties, and weekends were spent at parks & family outings.  I have photos of the comings & goings to home, work, school, and church.

I’m sure they bonded hard after my mother’s murder in 1977.  I’m sure the sadness was shared as they leaned on each other for support.  I never saw pop buy her roses in a vase but he would bring home a hanging basket of impatiens. Grand ma knew pop was the biggest fan of her cooking and she never let him down.  I never heard them argue or disagree on much (in front of me anyways) and I saw pop kiss her at least once day.  Their personalities were much more opposite than most people know but they still complimented each other extremely well.  Grand ma took her time a lot- when getting ready to go places, when shopping, conversing, and when cooking.  That meant Pop had to be the definition of “patience.”

That was one of the biggest things about marriage I learned from pop. How to have "patience," to always pick your "battles" wisley, and to love a woman for what she is when you married her; not for what you think you can mold her into.  He taught me how to love a woman consistently, with not strings attached.  How growing old with a woman was a blessing not a jail sentence.  How you open a car door for your wife (when she gets out & in), take off you hat when a woman gets on the elevator, and take her wherever she needs to go (lol).

One of the saddest things was how pop had to watch her die.  He blamed himself for years.  He felt he could have done a better job taking care of her during her last days but there was no way; the cancer was just too strong. He loved her so much.  Her last words to him were, "Take care of Kahn."