African-American Nutrition and Disease - Where is the Leadership? 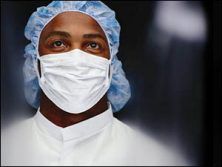 The June 23, 2014 Time cover story says “Eat Butter”- Scientists labeled fat the enemy.  Why they were wrong.”   Though this is being presented as a new concept; it’s actually been discussed, lectured and written about by cardiologist Dr. William Davis, journalist Gary Taubes, Peter Attia, radio show host Carl Lenore, and a host of other rouge & underground nutritionists and homeopathic doctors.  The premise is simple to explain:  America’s reliance on carbohydrates, wheat, and sugar while blaming fat as the culprit was 100 percent wrong.  The Native American population figured this our years ago.

The question here is simple.  Where is the African American medical professional leadership in regards to this issue?  It’s become more and more of a possibility that the Western diet is not suited for Africans Americans?  Dr. Ben Carson likes speaking on socials issues.  How does he feel about this?  What about Dr. Charles Modlin who founded a Minority Men’s Health Center?  What are his views?  There are many great and prominent African American professionals that who’ve done great work in the community and in their profession.  However; we’re still dying to disease faster than our Caucasian counterparts (the numbers are below).

My mission is not to start a blame game. My goal is to stir the pot, invoke conversation, and ultimately come up with some answers.
-Before age 50, African-American's heart failure rate is 20 times higher than that of whites (New England Journal of Medicine 2005)
-63 percent of  African-American men and 77 percent of  African-American women are overweight or obese. (American Heart Association 2013)
-African-Americans are nearly twice as likely to have diabetes than whites. (American Heart association 2013).
-Lung cancer was 36 percent more common in African American men than in Caucasian men. (Centers for Disease Control 2001-2005)
-Colorectal cancer is 20% higher and mortality rates are about 45% higher in African-americans.(American Caner Society 2011-2013)
-Prostate cancer rates are two-thirds higher in African-american men than whites. (National Caner institute)
-African American adults are twice as likely than non-Hispanic white adults to have been diagnosed with diabetes by a physician. (Office of Minority Health 2013)
-African American adults are 1.6 times as likely than their White adult counterparts to have a stroke (Office of Minority Health).
-African-Americans have a slightly higher risk of Alzheimer's disease than people of largely European ancestry. (The Journal of American Medical Association 2013)