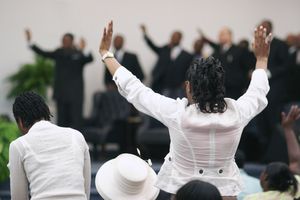 I‘m almost certain that when my grandparents went looking for a church home in the late 1950s - it wasn’t a complicated process.  They probably visited a couple of churches that were walking distance or a short drive away. I’m sure they took into account the message, warmth of the congregation, and the overall “feel” of the church when it came to making their decision.
Fast forward 60 plus years and looking for a church home is more comparable to looking for a new house.  There are 100 things you’re looking to feel/see and more you hope you don’t feel or see.  Also; you have to take into account that more black folks live in racially diverse neighborhoods or all white neighborhoods and this ultimately adds another layer to the process of picking out a church home.

The racial element cannot be overstated.  For many years in America Sunday was the most segregated day of the week.  Black and white Christians worshiping together is a relatively new phenomenon for many of us.  So far (for me) the experience at the new church has been fair and insightful but I do get “irked” here and there which prompted the writing of this blog.

The sermon this past weekend focused on, “Doing/believing what the bible says and not what you want (even if it’s political correct).”  This meant a “No” to gay marriage, cohabitation before marriage, and “No” to a few other things.  What alarmed me was towards the end of the sermon; the pastor brought up Martin Luther King and Malcom X.  The pastor said his daughter was writing a paper on the 2 civil rights icons and she asked him; “Who was right?”  He said, “Well one has a holiday named after him and the other one doesn’t” (to answer her question).  That got under my skin because I felt it disrespected Martin and Malcom.

I can guarantee you that if you have unfavorable views towards Malcom X; you probably don‘t know his story cover to cover.  It’s 2 million times deeper than his criminal youth.  It’s 2 billion times heavier than the “by any means necessary” sound bites recycled in media clips over and over and over again.  There is nothing wrong with giving an opinion - but when you’re an orator, a leader over a group of people, or pastor of a congregation: you owe it to them to make sure your opinion is based on the whole history of a man, not partial.  The same applies for Martin.  He’s much more than a Monday off work and an “I have a dream” speech.  Read his writings and speeches that preluded his death.  Like Malcom; he was a work in progress.  Lastly; it was and is never about Malcom vs. Martin.  There was/is never a need to pit them against each other.  They agreed on a lot more than most people think they did.

That also wasn’t the first time he got under my skin.  The first time was his Independence Day sermon.  It was about reclaiming America’s values.  The pastor cited and gave credence to the founding fathers of America (starting in 1620) for establishing Christian morals.  He stated America needs to look back at that foundation while moving into its future.  The sermon went on it to highlight how America has always proclaimed to be a Christina nation, that there are several bible verses on public buildings in D.C. and Pilly. He said America is currently in a moral abyss.

While I get his point; I have never been a fan of people that overly romanticize America’s history with a broad brush without citing some of its flaws.  What may have been wonderful for you and your ancestors might not have been so great for others of different races and genders.  Many years went by in this country in which women couldn’t vote.  Until the last 40 or so years – a man could beat the hell out of his wife and it was considered “his business.”  The plights and massacres of Native Americans and blacks have been well documented.  Again; when in a spiritual leadership position – the backgrounds of all people need to be taken into consideration.  You can’t treat America like the eulogy at Uncle Harry’s funeral and talk about all the great things he’s done without some of the flaws.  It doesn’t work like that.  Not when the point of the sermon is that America was a better America 1619-1930 than it is now.  I can assure you that you would be hard pressed to find any black person that wants to go back and life in that time period.

Now I may be overly analytical.  Some may say my gripes are meaningless and not race related.  Others may say I’m looking too deeply in to things and maybe it’s just me.  You could say that the standards I’m holding the pastor to are too high.  All that is fair as I’m willing to accept whatever criticism that comes from this blog - negative or positive.