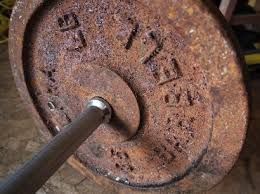 Sometimes when you run into old acquaintances after a long absence; their appearance tells the story before their words do.  Today I ran into Steven.  A twentysometing year-old cat I used to share small talk with at the gym.  He looked awesome; as if he never missed a day at the gym when in reality he hadn’t been in over a year because of money issues.
After the typical hand slaps and greetings were exchanged; he opened up about being separated from his wife, the problems he was having seeing his son, moving out of his house and into an apartment, and the passing of his father.  Though you couldn’t tell it by looking at him- Steven had a pretty horrible 2013.

When we got on the topic of working- out he told me all he had was one barbell and 4 forty-five pound plates (no bench).  The weights were his father’s that he found cleaning out his garage.  They were old and rusted.  He said he used them every day: arm-curls, deadlifts, bench -press off the floor, squats, barbell rows, plate raises, farmer walks, weighted lunges, skull crushers, and one arm t-bar rows. He said he never misses a workout and had to learn to love the uncomfortable solitude of working out in a small studio apartment.  He said the love for his son and memory of his father drives him.  As we parted had told me he wasn’t sure when he would be able to afford his gym membership again but assured me he was blessed and the next time we would run into each other – he was going to be in a better place.

There was so much I took away from this encounter.  The fact he was going through so much and was making it a “point” to work out.  The fact that his father’s barbell was his comfort, his hope, and his fight.  Just based on his tone, I assume the barbell is almost the same size of his apartment.  I think working out now means more to him than it ever did.

If he would have told me he was going to get back in the gym after his life got more stable – I wouldn’t have thought anything of it.

What would you have done?  If the walls of your life fell down around you and all you had left was a rusted barbell?  Would you trip over it? Throw it out?  Or lift it?