Why African-Americans Should Care about The War Against GMO Food 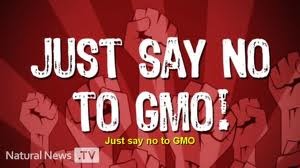 I’m going to keep this simple and short.
The problem: GMO Foods

What are GMO Foods: foods produced from genetically modified organisms.  They have had specific changes introduced into their DNA via chemical, radiation, and mutation engineering techniques.

In Layman’s terms- its corn, wheat, veggies and fruit (etc..) that have been zapped or injected with weird shit to make it grow faster, more abundant, and look good.  However nothing good happens when you mess with Mother Nature.  God made everything perfect.  When food is genetically changed- it’s not the same.  If you have a glass of water and put a Kool-aid packet in it; it’s not water anymore right?  When you take corns seeds and zap them with radiation – it’s not the same either!

Why should you care?

-Before age 50, African-American's heart failure rate is 20 times higher than that of whites (New England Journal of Medicine 2005)

-African-Americans are nearly twice as likely to have diabetes than whites. (American Heart association 2013).

-Colorectal cancer is 20% higher and mortality rates are about 45% higher in African-Americans.(American Caner Society 2011-2013)

-African American adults are twice as likely than non-Hispanic white adults to have been diagnosed with diabetes by a physician. (Office of Minority Health 2013)

-African American adults are 1.6 times as likely than their White adult counterparts to have a stroke (Office of Minority Health).

-African-Americans have a slightly higher risk of Alzheimer's disease than people of largely European ancestry. (The Journal of American Medical Association 2013)

The Problem and the Solution is the same thing:  FOOD.  It’s not poverty, it’s not the health care system- it’s the food, food, food.  You put the right things in your body – and your body will respond the right way.   You put food in your body that has been freaked out in a lab – your body won’t react correctly.  You may not grow horns and a tail but you will become more susceptible to Cancer, viruses, and an array of other ailments.

What can you do?  Support “Anti-GMO” causes and when shopping – look for “NO GMO” labeled foods.